Popularity of the Name ‘Muhammad’

By: Mike Azar
In: Misc
With: 2 Comments

I was exploring the Social Security Administration’s U.S. baby names data set for interesting trends in baby names (no, I’m not expecting, just curious). There are lots of interesting analyses that can be done with this gigantic data set of baby names from 1880 to 2013. The first write-up will look at the popularity of the name Muhammad (and its alternative spellings) among U.S. babies.

Figure 1 below shows the percentage of U.S. babies born in each year with the name Muhammad (or alternative spellings) from 1960 to 2013 (too few U.S. babies had that name before 1960). As the chart shows, the name’s popularity has grown from approximately zero to approximately 0.14 percent of U.S. babies in about four decades. Interestingly, the name’s popularity dropped significantly in 2002 for a few years before resuming its upward trajectory. Perhaps American-Muslim families were more reluctant to chose an obviously Muslim name for their babies in the aftermath of September 11. We see the same trend with other Muslim names.

Figure 1. The Proportion of U.S. Babies with the Name Muhammad  (and Alternative Spellings)

There are many different ways to spell the name ‘Muhammad’. It took a little bit of work to parse through all of the data and pick out the most common spellings. Figure 2 below shows the relative popularity of the top six spellings. There are a few other less common spellings but they are so unique that they barely show up on the chart. It is interesting to see how the spelling of the name has changed over time. The spelling ‘Muhammad’ has become the most common in the last year; it’s popularity has been growing steadily since 1990.

Figure 2. The Relative Popularity of Different Spellings of the Name Muhammad 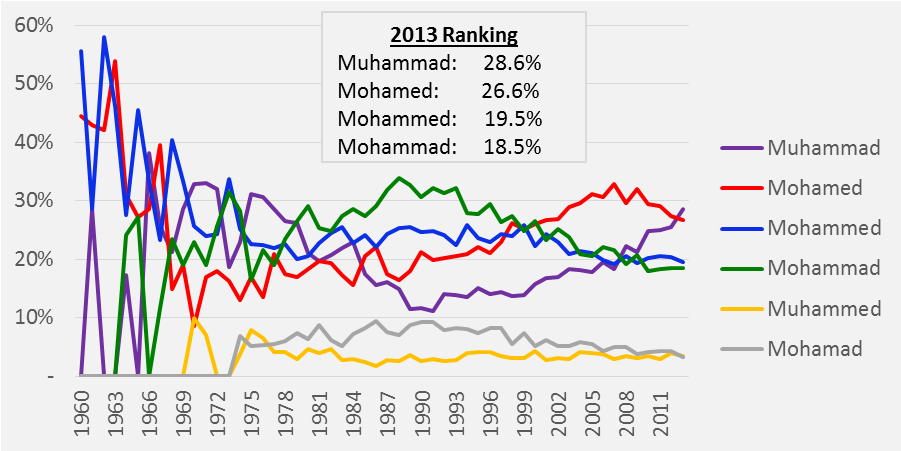