By: Mike Azar
In: CaBi, Washington, DC
With: 0 Comments
This is part three of our four-part series exploring data from the DMV area’s Capital Bikeshare system. In the first two parts of the series (published in early 2015), we examined rider and bike patterns based on data from 2.9+ million Bikeshare rides taken in 2014. Now that it’s October 2015, and Bikeshare has released data for the first half of 2015, today’s post will explore popular routes and stations during the year from July 2014 to June 2015 (about 3.1 million Bikeshare rides). The entire series covers the following topics:

Registered riders (i.e., D.C. residents) mostly ride outside of the area around the monuments. Tourists could benefit from observing the popular routes among registered users to explore some of the less well-known parts of D.C. that the locals frequent, including Eastern Market and H St Corridor.

Among casual riders, the most popular route is always some combination of stations around the National Mall.

Figure 2. Most Popular Route by Month

Measuring distance traveled is a little tricky because we don’t know the exact path taken during each ride. Some rides might follow a direct path from point A (starting station) to point B (end station) but others might start and end at the same station with a long ride in between (as we observed earlier). Others might dock their bike to re-start the 30 minute timer before continuing on to their ultimate destination. Nevertheless, we can still roughly estimate ride distance in two ways. We can either calculate the distance between the starting and ending station (using the haversine formula to estimate distance between two latitude/longitude coordinates), or we can divide the duration of each trip (in minutes) by an assumed average bike speed – about 10 miles per hour (compared to 5.9 miles per hour implied by the first method).Figure 3 shows the results under each of these two methods. The average ride is between 0.9 and 1.8 miles, depending on our estimation method. The true average is probably somewhere in that range. 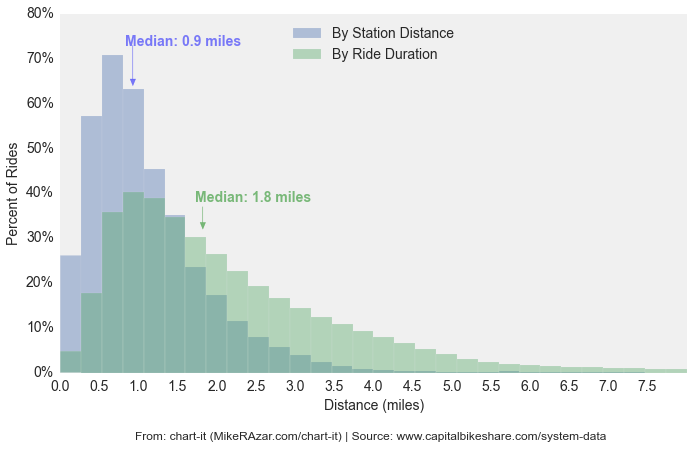 Now let’s take a look at the Bikeshare stations. The number of stations has continued to grow during the year ending June 2015. As shown in Figure 4 below, the system started the year with about 325 active stations and ended it with close to 351, an eight percent increase (or 26 stations). There were 362 unique active stations during the year, about 11 stations more than the 351 that were active in June 2015. It is likely that these 11 stations were either temporarily or permanently shut down, or moved to a different location (and, therefore, changed names) during the year.

The number of stations increased gradually over the course of the year with November 2014 and April 2015 seeing the largest increase with 10 and six new stations, respectively. 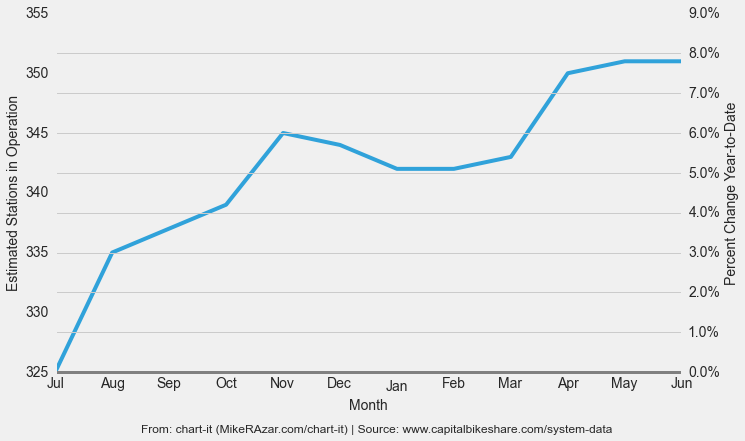 As shown in Figure 5, stations are most densely located between Foggy Bottom, Thomas Circle, Downtown and Chinatown, with scant coverage in certain areas, particularly in the low income neighborhoods east of the Anacostia River. Capital Bikeshare recently announced plans for a major expansion in Washington, DC, partly to service areas with little coverage, but also to better reach casual riders around the National Mall. Most of the new stations are proposed to be built in the area from the National Mall and north to Columbia Heights, with a small to be built proportion east of the Anacostia river.

Figure 6 summarizes the workload distribution across stations based on the number of trips started or ended at that station. The bottom quantile of Bikeshare stations recorded less than 7.2 trips per day during the year. The top quantile recorded more than 80.8 trips per day. We measure station activity using rides per day to adjust for the fact that some stations were not operating during the entire year. It would not be accurate to compare the total number of rides for a station operating for 12 months versus a station operating for just three months.

Figure 6. Summary of Workload by Station

Let’s take a closer look at the distribution of ride activity by station. Figure 7 shows that half of stations registered less than 25 rides per day, with the remainder spread generally evenly between 25 and 200+ rides. At the extremes, about 15 percent of bike stations logged either less than 3.9 rides or more than 100.9 rides per day in 2014. This demonstrates Bikeshare’s social/political objective to provide a convenient mode of transportation for tourists and locals. A profit maximizing system might avoid many of the low traffic areas. The downside of course is that the system is more expensive as a result. 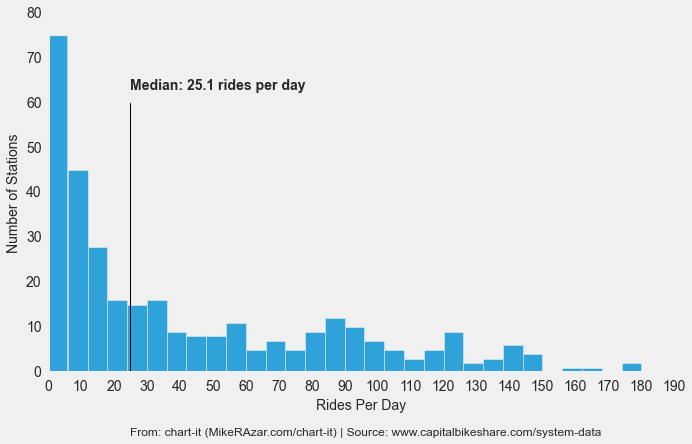 But each ride is not created equal. There also appears to be a difference in the duration of rides from one station to another. The shortest trips originate from stations in the area from Downtown to Adams Morgan (highly efficient Washingtonians, no doubt) and around the neighborhood and business districts in Arlington. On the opposite end, the National Mall area (mostly casual riders) and ‘suburban DC’ neighborhoods tend to have the longest duration trips. The record, however, goes to the Prince St & Union St station (in Old Town Alexandria), which had by far the longest trips at 37 minutes! Figure 8 shows the median trip duration for each station. Red means longer trips and blue means shorter trips. Click on a station to see its median ride duration.

We were also interested in the relationship between how busy a station is (in rides per day) and its size (number of docks). In other words, we wanted to know how successful Bikeshare has been at placing the larger stations in the busiest areas and the smaller station in less busy areas. First, let’s take a look at station sizes (Figure 9). Bikeshare stations have between seven to 42 docks, with a median size of 15 docks.

Now let’s plot rides per day against station size to measure the relationship between how busy a station is and its size (Figure 10). The correlation is relatively strong at 0.58. In other words, the busier stations tend also to be larger, which makes sense and reflects well on Bikeshare’s station placement strategy. But not all busy stations are large, which may lead to congestion (either no bikes or no docks). 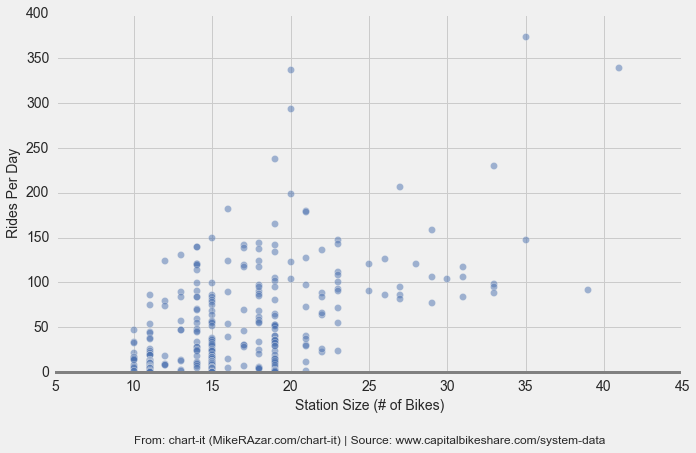 One rough way to measure station congestion is to calculate the ratio of ‘rides per day’ to ‘station size’ (the higher the ratio, the more congested the station). Figure 11 below shows this ratio for each station (red means more congested and blue means less congested). Click on a station to see its ratio.

Figure 12 shows the stations with the highest ratio of rides per day to station size. The stations with the highest ratio are generally some of the busiest stations in the entire system and, therefore, most likely to be the targets of bike rebalancing by Bikeshare. As a result, we also show the most congested stations excluding the top 50 busiest stations by total number of rides (which are less likely to benefit from rebalancing). A more accurate way to measure station congestion is to collect real time station data, which can then be used to calculate the percent of the time that a station either has too many bikes or not enough bikes. That is an analysis for a future write-up.