By: Mike Azar
In: Crime, Washington, DC
With: 3 Comments

Earlier this week, we examined the surge in D.C.’s crime rate in 2015. We discovered that, as of August 2015, D.C.’s monthly homicide rate had more than doubled from the 2011 to 2014 average. Since 2011, there had been only one month when D.C.’s murder rate reached as high as 16 victims. There have been 16 or more murders in every month since May of this year (including 14 so far in August).

In this write-up, we’ll examine the violent crime rate within Wards and neighborhood clusters, and rank the most improved and most regressed neighborhoods. The data shows that just three neighborhoods account for nearly 80 percent of the increase in the murder rate so far this year.

Let’s take a look at the annual homicide rate by Ward (Figure 1). For those of you less familiar with D.C.’s geography, here’s a boundary map of each Ward. Since we’re only halfway through 2015, the charts below only consider crimes reported between January and August 19 of each calendar year (rather than the entire calendar year). We’ve excluded Ward 3 because there are not enough data points in that area to create a meaningful chart (although the murder rate there has increased between 2014 and 2015).

Murders are up in every Ward, except 1 and 7, with Ward 8 registering the largest increase. While D.C.’s homicide rate has clearly increased between 2014 and 2015, the rate appears to have begun its increase in 2013 and not 2014. Only Ward 7 experienced a significant decrease in homicides between 2014 and 2015. 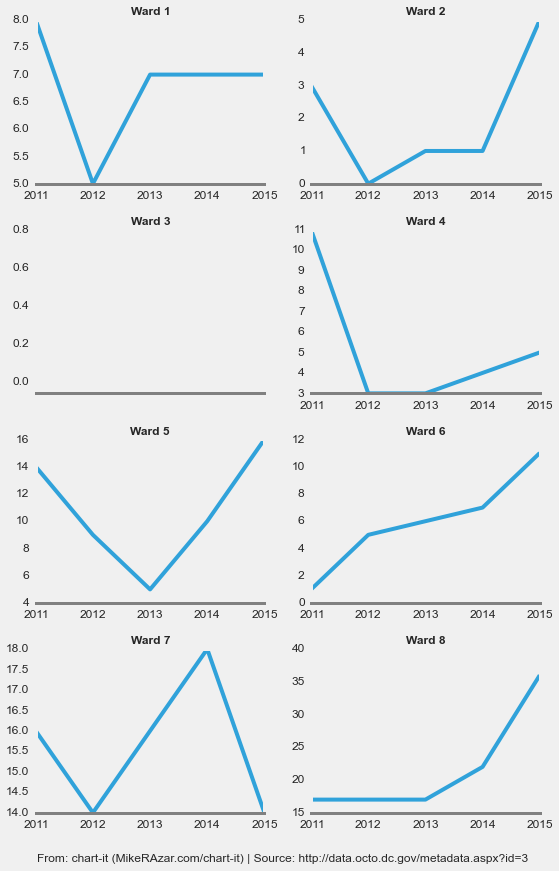 The increase in the homicide rate in Ward 8 is equal to just under half of the net increase in the number of murders between 2014 and 2015. The increases in Wards 3 and 5 each make up about 18 percent. Within each Ward, specific neighborhoods have been affected more than others.

Figure 2. Other Violent Crimes by Ward 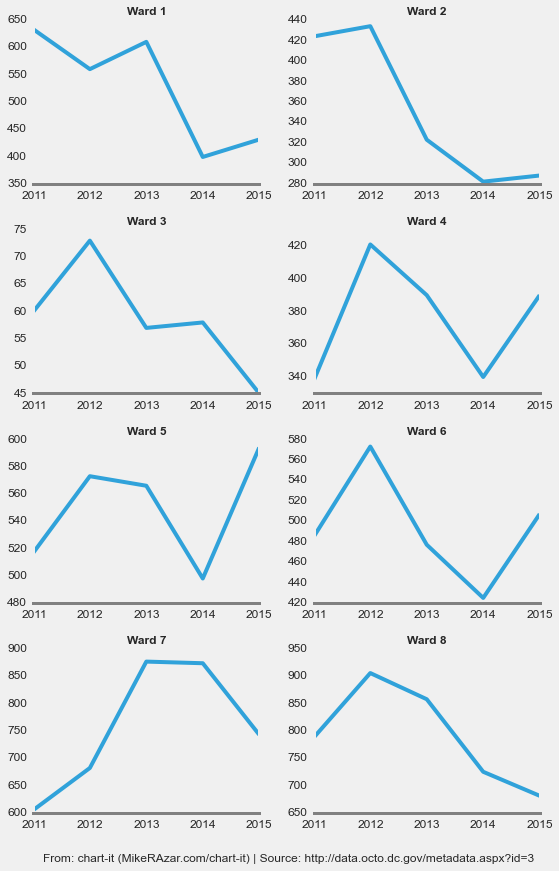 Relationship between Homicide and Other Violent Crimes

Figure 3. Relationship Between Change in Homicides and Other Violent Crimes 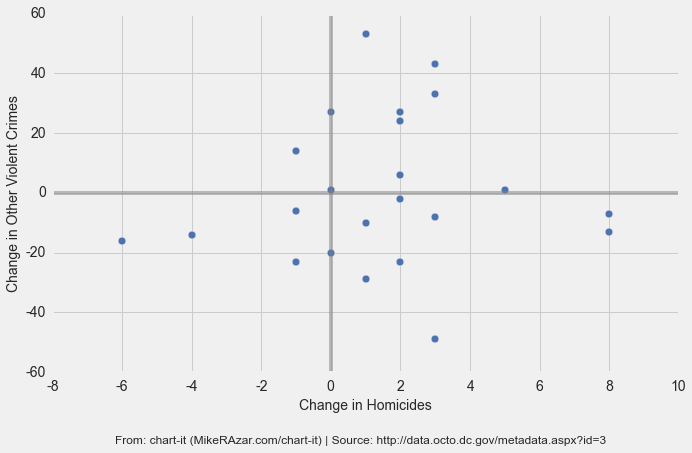 Most Improved and Most Regressed Neighborhoods

As we noted above, Ward 7 has seen the most improvement among all of the wards, registering significant drops in both homicides and other violent crimes between 2014 and 2015. Chart-it has also ranked D.C. neighborhoods by the largest increase and decrease in violent crimes between 2014 and 2015. We excluded the bottom 20th percentile to prevent neighborhoods with a very low crime rate from distorting the ranking.

Figure 4 shows the top ten most regressed neighborhoods. The top ranked neighborhood is in Ward 4. The next two are in Wards 1 and 5, respectively.

* Average Annual Violent Crime incident only includes period from January to August 19 of the period 2011 to 2015.

Figure 5 shows the top ten most improved neighborhoods. Not surprisingly, the top three are in Ward 7. Congratulations to Ward 7 for bucking the trend and becoming an overall safer place.

* Average Annual Violent Crime incident only includes period from January to August 19 of the period 2011 to 2015.