By: Mike Azar
In: CaBi, Washington, DC
With: 4 Comments

This is part two of our four-part series exploring system data from the DMV area’s Capital Bikeshare system.  This post is all about the sturdy workhorse of the bikesharing system, the bright red bike-tank that has become a staple of the DC backdrop.  We’ll explore bike activity and workload patterns based on data from 2.9+ million bikeshare rides taken in 2014, and give a special shout out to the hardest working bike of the year.  The series covers the following topics:

The data also shows two notable drops in the number of active bikes, the first in May, after the April spike in system usage (identified in part one of our series), and the second in November, right after the busy summer/fall season.  We suspect that these are due to an increase in bike maintenance or retirements following high system usage periods.  In October, just before the second maintenance period, there were 3,022 active bikes, the most in any month during 2014, reflecting a 21% increase in active bikes from January. 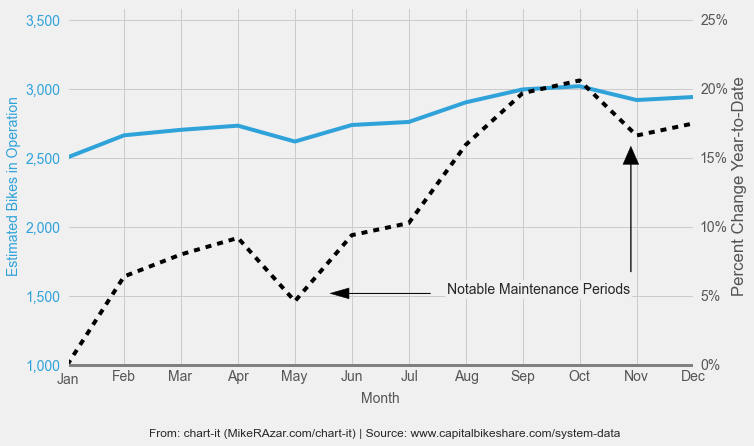 Only 1,619 bikes were active in every single month during 2014.  This suggests that about half of the bikes in the system were down for maintenance or otherwise idle for at least one month in 2014.  We don’t have a benchmark to compare this metric against, but we will explore it further during part four of the series, when we look at system trends of over time.

A summary of the workload across bikes in the system is shown in Figure 2 below.  The average full-time bike (full-time bikes are the 2,292 bikes that operated in both January and December to exclude bikes that either entered or exited service part-way through the year) carried out 1,027 rides for a total of 292 hours in 2014.  However, there is a disparity in workload across bikes as measured by the standard deviation.  We explore the distribution of the workload among full-time bikes further in the next section.

The workload is generally not equitably distributed among the bikes in the Capital Bikeshare system.  There are two ways to measure how hardworking a bike is: number of rides undertaken and total hours ridden.

As shown in Figure 3, there is a disparity in the number of rides taken by full-time bikes in 2014.  For example, the busiest 15% of bikes carried out about 72+% more rides during the year than the least busy 15% (that’s more than 44 rides per month).  The magnitude of the disparity is similar even if the analysis only considers the 1,619 bikes that were active in every single month of 2014.

We would be interested to know whether the uneven distribution of the workload increases a system’s overall maintenance costs and decreases the average life of the fleet in terms of total hours.  We also appreciate that the benefits of economic optimization need to be weighed against the cost of actively redistributing bikes and the impact on other system objectives (e.g., providing service to less populated neighborhoods).

Figure 3.  Distribution of Workload by Number of Rides 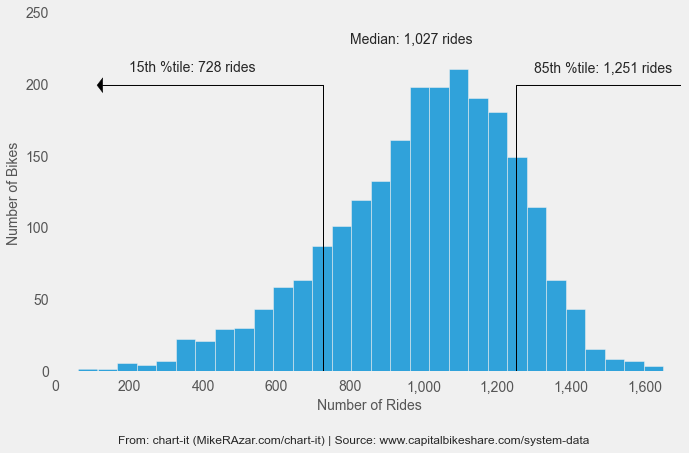 Figure 4 shows a similar disparity in the total hours logged by each full-time bike.  The average biked registered about 292 hours (12 days) of rides in 2014.  The busiest 15% of bikes registered 79+% more hours than the least busy 15% of bikes (that’s more than 159 hours). 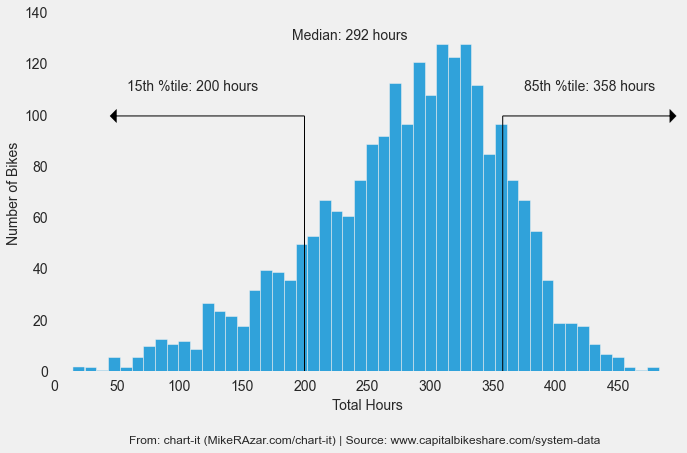 Where does W20167 spend most of its time?  Figure 5 below shows the top ten stations from which W20167 trips originated in 2014.  Not surprisingly, these are some of the busiest stations in the system.  Stay tuned for part three of the series, which will explore patterns related to bike stations and routes.